Tacoma police are facing a backlash after they responded to a woman’s 911 call by using a taser to arrest her. Yes, you read that right. She was the victim of a crime, called police, and was then victimized by the cops. Oh, and she’s deaf. 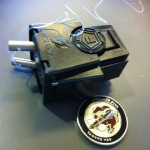 According to KIRO TV in Tacoma, Lashonn White called 911 on the evening of April 6 when she was attacked by a guest in her apartment. White is deaf and had to use special equipment to call the police. Using a sign language interpreter and a web cam, White relayed to the dispatcher what was happening and that she needed assistance. She also made it clear that she was unable to hear.

“Please hurry! There’s a person here beating me up!” she said to the 911 operator. “Right now! This is serious!”

The 911 call is said to reveal the urgent nature, the immediacy of her need for help.

Officers Ryan Koskovich and Michael Young arrived at White’s apartment within six minutes of her call.

“I’m deaf. I can’t hear if they’re out front knocking or whatever…I can’t—are they going to the front or back? Where are the police at?” White says to the dispatcher. When the operator tells her the cops are out front, she indicates she is going outside to meet them “right now.”

It only took seconds for the cops to see White coming out of her door and for them to fire a taser at her, hitting her midsection. She fell to the ground where she began bleeding from her knuckles. Her face swelled up.

White says she isn’t sure what happened but that she ended up in handcuffs and in pain. She couldn’t communicate with the officers, not only because she couldn’t sign with her hands cuffed, but because they didn’t know sign language.

They transported her to jail. She was charged with simple assault and obstruction of a law enforcement officer. She was in jail for 60 hours, without an interpreter, before her case was reviewed and the charges dropped.

The officer’s accounts differed slightly from what one witness saw. They claim they held their hand up as they yelled stop to White. The witness said they didn’t use any hand signals. A former Bellevue police chief reviewed the police reports and said they were “obviously written in concert, after the fact, to CYA.” (CYA- Cover Your Ass)

Ate law mandates an interpreter when deaf people are suspected of a crime. One was never provided to White.

When you call 911, you expect to receive help, not harm. But when a case of mistaken identity or a rush to judgment by police ruins that, you could be left with much more than a jaded view.

Police departments across Washington State have not exactly been covering themselves in glory lately. The Seattle PD is getting Federal oversight after being accused of many incidents of unconstitutional use of force.