May Day 2012 marked a day of protest around the world. In the U.S. these protests were particularly large in cities like New York, Oakland, and San Francisco. But the May Day activities in Seattle made front page news, not because of the large numbers or some positive change they effected, but because the failed and allegedly violent police response.

An independent review of the Seattle police’s response to the protests was recently released, and provided a scathing report on the shortcomings of the city’s department and upper-level decision makers. 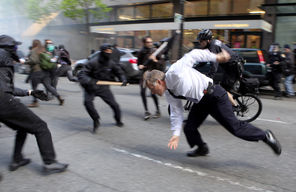 According to the Seattle Times, the report was authored by former Los Angeles Deputy Chief Michael Hillman. In total, it was 62 pages long. Hillman made a total of 38 recommendations and offered a list of “a litany of failures that allowed widespread violence and vandalism during a noontime march that left store and car windows smashed.”

The problems, Hillman noted, were largely due to confusion among officers caused by a lack of clarity from officials on what was expected from them. Officers weren’t clear on when they could use force or what level of force to use.

Initially, it seems, commanders were told that the police should exercise a largely “hands off” approach on May Day. And according to interviews with civilians, the streets of Seattle were abnormally absent of cops when the protests began. Commanders were encouraged to use little to no enforcement, “invisible deployment” and no pepper spray.

But when the protests took a turn for the worse and the peaceful protests were allegedly infiltrated by anarchists with violent property destruction in mind, officers weren’t sure how to respond, and that’s where things got ugly.

In addition to officer confusion, there was the issue of divergence in the upper ranks. “Planning interference” by Assistant Police Chief Mike Sanford was blasted in the report after Sanford rushed into the crowd in “shirt sleeves” to make an arrest. He had to be rescued by officers around him this rescue required officers to use force that would have otherwise been unnecessary.

With the report being issued about a month before May 1 2013, there is a good chance officials will be better prepared this time around, and officers will be well-informed with clear expectations. Even with embroiled Seattle Police Chief John Diaz stepping down, there is likely to be some greater leadership on May 1 in light of the mistakes made last year.

If you are arrested at a protest and charged with disorderly conduct, rioting, or resisting arrest, we may be able to help. You have rights. Contact our offices today to discuss your case and the legal options available to you.