When recreational marijuana was passed in November, people across the state of Washington sparked up in celebration. It was a little Wild West as marijuana users attempted to find where they could fit in with the new laws. As a result, private clubs were formed—something officials say breaks the law.

According to Reuters, some bar and restaurant owners changed their businesses or at least a portion of their businesses to private clubs. By doing so, they hoped to make it okay for patrons to light up inside without fear of arrest. Not so, says the state.

The marijuana law in Washington allows for people to possess and use marijuana, but it does not allow a public display or public usage. The state’s Liquor Control Board says these businesses are skirting the law and they will be held responsible. 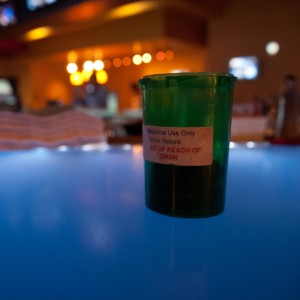 “You can’t open it up, you can’t show somebody, and you certainly can’t smoke it or ingest it in some way in a public place,” said Brian Smith, a spokesman for the board. “Bars and restaurants are public places that we license.”

As the law is currently, there is nothing dictating how officials are to handle such businesses that allow marijuana on their premises. However, violating the public use part is punishable by a $103 fine to customers.

Business owners see their coversion to private clubs as a way to ensure those within approve of the smoky surroundings and that they shouldn’t be subject to the “public” use aspects of the law. They do want to comply but say they believe they are in compliance with the law.

Frank Schnarr of Frankie’s Sports Bar & Grill in Olympia has set up a private room in his establishment specifically to allow customers to use marijuana. He says he plans on keeping it that way and is prepared to fight any restrictions in court.

“It got passed for recreational use,” says Schnarr. “They should let it be smoked everywhere.”

The governor is opposed to such “public” use, says a spokesperson. Allowing businesses to skirt the law would “send the wrong message”.

It’s likely the Liquor Control Board will be addressing the issue in their upcoming regulations, due to be drafted by May 22, heard before the public on June 26, and up for vote among board members on July 3. Any new regulations would take effect August 3.

Despite recreational marijuana now being legal, there are restrictions and you can still be subject to criminal penalties if you violate the current system of laws. If you are charged with a marijuana offense or any drug-related crime, let us help you, call for a free consultation.