Carrying a small sum of cash on you is usually not cause for concern. But if you’ve ever withdrawn a couple thousand dollars, for a car down payment or other purchase, you know that walking around with that much dough can be a little intimidating. Imagine that feeling multiplied, a million times over, and you’ll have something similar to what those involved in the now-legal system of marijuana are experiencing.

Responsible business men and women are looking to carve out a piece of the budding marijuana industry, an industry that is likely to bring in millions in its first weeks, once recreational dispensaries are up and running. But for these business people, fear of crime is something they likely didn’t think they’d have to worry about. Without legitimate banking options, they are left with all-cash businesses, and concerned they are leaving themselves open to robberies and thefts.

“It’s straight up dangerous,” says Brian Stroh, owner of one of the first licensed marijuana production and sales businesses in the state. “Anytime there is a known cash business, it puts everyone at risk.” 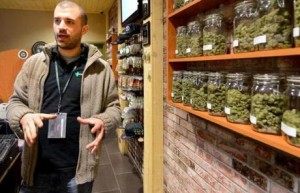 Not only does he have to worry about someone eyeing what will likely be hundreds of thousands of revenue in mere weeks’ time, but also the product he’s selling—high grade marijuana and marijuana products.

Marijuana retailers simply can’t find banks willing to work with them. Though President Obama laid out a plan for banks to be able to work with these businesses last month, it was far from a guarantee. Instead, the guidelines came alongside a memo from U.S. Deputy Attorney General James M. Cole, outlining all the ways a bank could be held criminally responsible for dealing with marijuana retailers. As such, banks don’t want any part of it.

For people like Brian Stroh, the concern isn’t only for his business and its revenue, but for the people who work for him—the service workers who will be in the store closing it down at the end of the night, the ones responsible for the safe and lock boxes, and thousands of dollars’ worth of marijuana.

He’s also concerned about his customers, who will flock to his dispensary with wads of cash in their pockets, unable to use their debit or credit card to make a purchase and therefore putting themselves at risk. Because new Washington marijuana legalization still doesn’t allow citizens to grow marijuana, they will be visiting these pot shops and they will be coming with cash.

“Any cash business is incredibly dangerous,” said King County Sheriff John Urquhart. “Unless we have the cooperation of the banking industry, which requires cooperation of the federal government, we’ll be right back where we started.”

While a new study indicated legalizing marijuana does not increase crime rates, despite what marijuana opponents have been saying since day one, not having banking options could.