In March, King County Superior Court Judge Ronald Kessler made a mistake. He used the information available to him and made a judgment call that ultimately resulted in tragedy. For this, he was vilified by the media in Washington state and across the country. Feeling as if he had been treated unfairly by people who didn’t fully understand the law and his role within it, Kessler recently invited a reported from the Seattle Times to see just how a day in the life of a criminal court judge goes.

Judge Kessler makes hundreds of decisions each week, determining who can be released on bail, their own recognizance, and who simply needs to spend time in jail while waiting for trial. He makes these decisions quickly and based on all of the information presented by attorneys and court records. Usually, his decisions are right. 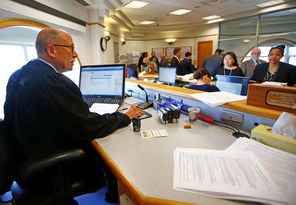 In March, however, Kessler made a decision to release a defendant on his own recognizance. That man, 55-year old Ricky Lee Lewis, had strong ties to the community, had lived in the area for 48 years, was receiving mental health care, and he had come to court voluntarily. Lewis was a sex offender and was charged with failure to register. But, when taking the totality of the circumstances, Kessler didn’t believe Lewis was an immediate risk.

He made the wrong decision. The day after asking for a continuance, Lewis is alleged to have kidnapped and raped an 18 year old woman after offering her a ride home.

“I feel terrible when people are victimized if I had any role in it, but that doesn’t mean I made the wrong decision. I took an oath to uphold the law,” Kessler said. Still, when situations like this occur, he gets a “knot” in his stomach. Though he feels he made the best decision given the information he had, he still feels bad.

Not bad enough that he thinks his photo splashed all over newspapers is appropriate. Hardly.

“I thought it was unfair, especially running my picture out there like a mug shot.”

In the state of Washington, when a judge decides whether or not a defendant should be allowed to be released on his own recognizance, he takes three things into consideration—whether that defendant will skip court if released, whether he will potentially commit a violent offense if released, or whether he will intimidate a witness. If the prosecution can’t demonstrate one of these factors, the defendant will be released.

Judges have huge caseloads and see dozens of people each and every day. To vilify one because he erred on the side of “innocent until proven guilty” is wrong.

If you are facing criminal charges—whether it’s for a sex offense or a drug charge—you deserve to be treated fairly. Contact our offices today to discuss your case.