The Seattle Police Department intends on using drones—the small, unmanned aircrafts most often used in war. Many citizens aren’t happy about this intention, and they are making their disdain known. 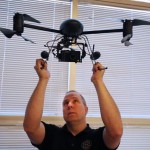 “We don’t trust you with the weapons you do have!”

“We are not going to tolerate this in our city. This is unacceptable!”

Shouts of opposition drowned out police officials at the SPD’s community meeting, held in part to discuss the use of drones.

While Chief Paul McDonagh tried to talk about how the drones would be used to increase public safety, shouts of “murderer” and “no drones” drowned him out. The Seattle Times reports that the first community meeting on the topic was a show stolen by protestors.

The issue, among others, is that citizens see these tools as military tools. Even when they aren’t equipped with weaponry, the “eye in the sky” conjures images of oppressive governments and privacy invasions.

Hasn’t anyone heard of George Orwell’s 1984?” shouted protestor Matt E. “This is the militarization of our streets and now the air above us.”

Several cities across the country are now making use of what were once only military tools. The drones purchased by the Seattle P.D.—and there are two of them—are known as Draganflyer X6 Helicopter Techs. The department received FAA approval for the drones following the president’s signature on a law urging the agency to “plan for the safe integration of civilian drones into American airspace by 2015.”

So far, the city says their drones will only be used in homicide, traffic, hazardous material, search and rescue, barricaded persons, and natural disaster cases. But, it’s the open nature of the proposed drone guidelines that leads many people to question what other uses the city will eventually include.

The ACLU of Washington has asked the city to tightly regulate what sort of information will be collected, how it will be stored, and how long it will be kept.

Jennifer Shaw, deputy director of the ACLU-Washington, says “the ways that they say they can use the drones is too broad. They have a list of different emergencies and then a catchall phrase saying the drones can also be used in other situations if they get permission.” She suggests the drones should be regulated by city ordinance rather than police rules.

Policy, she says, can be changed. But a city ordinance cannot be changed “at will and is the only way we can be sure there is meaningful input.”